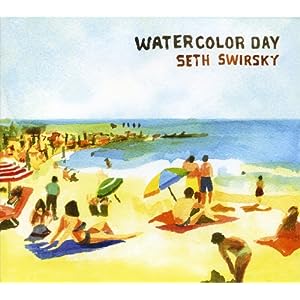 There two words to describe Seth Swirsky — “Renaissance Man.”  In addition to being a collector of sports memorabilia and an author of three published books,  Seth Swirsky is a talented musician/songwriter.  His new album, Watercolor Day, is a combination of pop and folk music mixed into one.

Seth Swirsky, except for “Amen,” which was written by Seth Swirsky and November Nights Music, Inc, wrote the 18 songs.  Listening to the music, you can tell that The Beatles, The Beach Boys and other great 1960’ s/70’s performers influenced Mr. Swirsky.

Seth Swirsky knows how to write songs.  Before writing them for himself, he wrote songs for Taylor Dayne, Michael McDonald and Rufus Wainwright.

In Watercolor Day, he sings, plays guitar, bass, piano and backing vocals.  Some of the songs, he ads other musicians but the majority of the music is played by him.

My favorite song on the album is Watercolor Day, named after the album. The song opens with strumming on the guitar with Seth Swirsky singing.  When the rest of the instruments join in, colors, sound and beautiful images fill your mind.

The song, I’m Just Saying, reminds me of a song that could appear on The Beatles Album, Abby Road.  The harmony, instrumentals and words make you sway your head and smile.  It’s creates a good, positive feeling.

I Never Knew You (Harry) is a song about Harry Nilsson, and sounds just like one of his songs.  I remember when I was a teenager, my friends and I used to watch “The Point” over and over and over again! We would constantly sing the songs from the movie like, “Me and My Arrow.”  So when I heard this song, it made me reflect back on my childhood and Seth Swirsky not only sings it the way Nilsson sang his songs but he just hit the “arrow” on the target with this one!  He sings,” I never knew you Harry but I loved you so.”

The song, Sand Dollar, reminds me of a child’s song.  I don’t know why, but I think about the Teletubbies or Barney. I actually asked one of my staff members to take the CD home and play it for her 3-month-old son.  She sent me a message on Facebook saying that her son starred blankly and gave it a 7 out of 10 because when the music turned off, he started to cry.

If you like folk/pop music from the 1960’s and early 1970’s, you will love this album.  To be honest, when I first heard it, I didn’t love it but the more I listened to it, the more fun I thought it was.  It’s worth a listen if you like this type of pop/folk music.

This blog was first published in Blogcritics.org.

Medical Errors – Third Leading Cause of Death in the US